This year the theme for Science Week was Light. This actually covered many different interesting branches of Science. How light behaves (reflection, refraction and colour), the human eye and optical illusions, cameras and photography, solar power, and ultra-violet light.

Throughout the week each Primary class focussed on an aspect of light that was relevant to their curriculum.

Then for one lesson they came to the science lab to see some experiments and demonstrations of light. We made some photographic paper by painting silver nitrate solution onto paper and then we put stencils over the paper while exposing it to uv light. This gave us silhouettes of the objects on the paper. We also looked at how different objects glow (fluoresce is the scientific word) under uv light, including our fingernails and teeth. Even scorpions glow under uv light!

We also looked at how we can make glass objects appear invisible if we put them in the right liquid, in this case vegetable oil. Because both substances bend light in similar ways (a property called refraction), the glass will be invisible in the oil.

There were several other cool experiments that showed different properties of light, but I always like to go out with a bang so I used a laser to burst a balloon. The science here is interesting because a white balloon won’t burst as the light is reflected off the surface, but if you paint a black spot on the balloon and aim the laser at that, then it absorbs the light, heats up, and BANG! The balloon explodes.

I really look forward to Science Week each year as I get to play with cool new science toys and discover new experiments to show the students. It’s a great way to get them interested in Science and to feed their curiosity about the world around them. 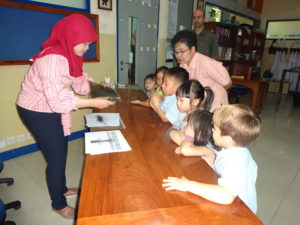